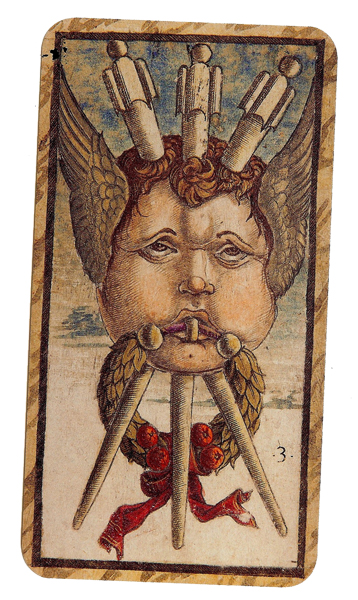 The Sola Busca Tarot was originally created in the late 15th century, engraved onto metal sheets by an unknown artist. These engravings were gifted to the British Museum in 1907 by the Sola Busca family. From these engravings the curator at the British Museum and art historian of old master prints, Arthur Mayger Hind was able to compare the originals to a later colourised print version of the deck obtained by the museum in 1845. Hind from this comparison discerned that the engravings were created in 1490, and then hand-painted only a year later in 1491 for Venitian miniaturist, Mattia Serrati da Cosandola.

It seems to be of no coincidence that the Sola Busca engravings were acquired and displayed by the British Museum in London in 1907 only a few years before the production of Pamela Smiths artwork for the Raider Waite deck released in 1910. The similarities and reproductions of imagery of this deck to the Raider Waite suggest that Pamela Smith almost certainly viewed these original cards while on display at the British Museum and was greatly influenced by them.

The deck follows a loose theme of the rise and fall of the Roman Empire, which can be seen through the appearance of myths, gods and historical figures dotted throughout.

The earliest surviving example of what is now considered the standard makes up of a ‘full’ tarot deck, 78 cards made up of 22 major arcana, and four suits comprising 56 minor arcana.

3″ x 5.7″ Cards in a large sturdy one-piece flip-top box. Includes a 127-page book detailing the history and divinatory meanings of the cards in English, Italian, Spanish, French, Portuguese, and Russian.